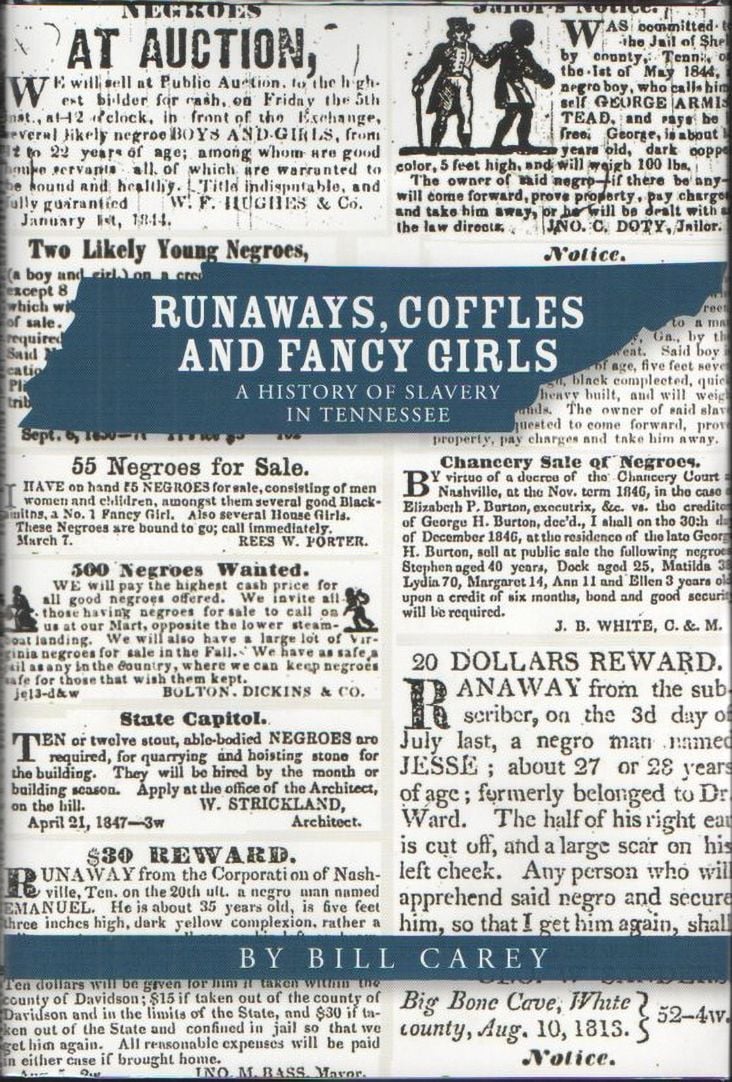 Carey explains in his book that these two facts are far from the whole story of slavery in Tennessee. Instead, they are an example of how history often flatters those who write it.1

While ownership of slaves was concentrated in a quarter of Tennessee’s population, slaves were leased out to individuals, companies, and municipalities. Slave labor was used for more than agricultural work. Slaves worked in factories and were used to build railroads, bridges and other infrastructure projects throughout the state. Slaves worked as blacksmiths, carpenters, coopers, stonemasons, miners, painters and a multitude of other types of skilled labor. Life insurance policies were sold covering slaves. An entire legal apparatus was created to support slavery and restrict the actions of slaves. Sheriffs arrested suspected runaway slaves and then sold those who were unclaimed. Slave auctions were routinely conducted by the local clerk and master of the chancery courts across the state. In addition to slave auctions conducted by the local chancery courts, Carey found seven instances when slaves were sold as a result of decisions by the Tennessee Supreme Court. Rather than being limited to a few owners or plantations, slavery was vital to Tennessee’s economy and entrenched at every level of society.

Carey concludes that misconceptions about slavery in Tennessee persist because those who teach our state’s history “don’t talk enough about slavery.” And when we as Tennesseans do talk about slavery, we seldom tell the full story. There is no better example of this than the Tennessee State Capitol. Prominently displayed in the Capitol’s rotunda is a bust of Nathan Bedford Forrest, who was, among other things, a slave trader in Memphis prior to the Civil War. Some oppose removing the bust for fear of “whitewashing” our history.2 However, often overlooked in the debate over removing the bust is that slave labor was used in the construction of the Capitol and that one slave died while quarrying limestone for the Capitol. I fear that the prominent display of a bust of a slave trader in a building that was constructed with limestone quarried by slaves shows that our history has already been “whitewashed” and that Tennesseans are a people “trapped in a history which they do not understand[.]”3  Carey’s book is a much-needed first step toward better understanding our state’s history.

JASON R. SMITH is an assistant professor of law at Lincoln Memorial University Duncan School of Law. He was previously a law clerk to Judge D. Kelly Thomas Jr., of the Tennessee Court of Criminal Appeals and a research attorney at Butler, Vines & Babb PLLC in Knoxville.  You can see more of what he is reading by following him on Twitter @jrs082 or at https://www.goodreads.com/jrs082.