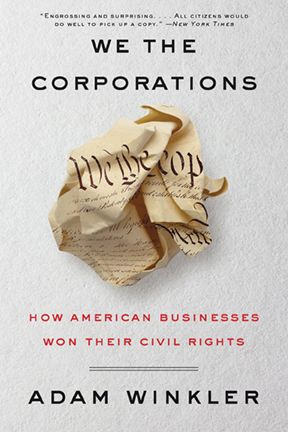 These are some of the questions explored by UCLA law professor Adam Winkler in We the Corporations: How American Businesses Won Their Civil Rights. Though written with a focus on Supreme Court cases, the book is intended for a lay audience. It reads more like a work of history than of constitutional law. And its central themes (What is the proper scope of a corporation’s legal rights? Are corporations people, or do they simply assert the rights of their members?) naturally invite discussion of recent controversies — think Citizens United — earning the work acclaim in the generalized category of nonfiction. (The book was a finalist for the 2018 National Book Award; and winner of the 2019 Book Award from Scribes — The American Society of Legal Writers.) Its timely exploration of these relevant, even urgent, themes makes the book a deserving read.

We the Corporations chronicles the untold history of how corporations won major legal victories through an activist litigation strategy amounting to a corporate civil rights movement. To begin this history, Winkler provocatively reimagines the origin story of the United States. The “myths taught to schoolchildren” about the Pilgrims’ landing on Plymouth Rock obscure the truth: “this land was first colonized not by religious dissenters but by a business corporation.”4 Before the Pilgrims, the colonists who settled in Jamestown in 1607 “were primarily employees of, and investors in” the Virginia Company.5 Their purpose “was to make money — for themselves, for the stockholders, and for [King] James, who planned to take a cut of everything they made.”6 (The largest stockholder in the company was Sir Thomas West, whose title was Lord De La Warr, for whom the State of Delaware would later be named.)

Democracy came to America, in Winkler’s telling, not from any liberal egalitarianism, but out of corporate necessity. The Virginia Company authorized the creation of a “General Assembly” in 1619 to enact laws to replace the existing martial law regime. The corporate leadership of the Company understood that to attract future settlers and to sustain its investments, the Company would need to allow the colonists to “have some say over their day-to-day lives.”7 Self-governance and public assembly, then, were borne out of the corporate form. Winkler even traces the origins of the Constitution itself to early corporate charters, observing that fundamental rights such as due process, equal protection of the laws, the right to a speedy trial for criminal defendants, and others were contained in the “Body of Liberties” of the Massachusetts Bay Company, enacted in 1641 as a corporate bylaw.8

While constitutionalism and Democracy were “intimately tied up with the corporation” from the nation’s early beginning, the Constitution, as ultimately enacted, does not contain the word corporation anywhere in the document.9 Nor, in Winkler’s examination, do records of the Constitutional Convention “provide any hint” that the Founders gave much thought to the scope of corporate rights.10 It would be left to the Supreme Court to resolve whether corporations could plausibly claim rights under the Constitution.

In many ways, the very first “corporate rights” case triggers the same familiar tensions we are still, more than 200 years later, litigating at the highest levels. In 1809, Bank of the United States v. Deveaux addressed the deceptively fraught question of whether corporations have a constitutional right to sue in federal court.11 The Judiciary Act and Article III granted that right only to “citizens.” Was a corporation a citizen? In this initial dispute, the battle lines in the war over corporate rights were first drawn, and there they remain, centuries later.

By one way of thinking, a corporation is a separate, though intangible, legal entity — a fictional “person” distinct from its members. The corporation enjoys certain legal benefits — limited liability and perpetual life among them — that allow it to accumulate vast sums of money far greater than the wealth of any individual. In exchange for these benefits, the corporation’s legal rights are not coextensive with those of living, breathing, people.

But by another way of thinking, a corporation is merely an association of real human persons, with clear constitutional rights. Under this approach, the corporate veil may be pierced in order to safeguard the rights of the individuals behind that veil. Chief Justice John Marshall chose the latter approach in the Bank of the United States case, holding that a corporation could sue and be sued in federal court by looking to the “character of the individuals who compose the corporation.”12

Winkler brilliantly observes a subtle irony of these competing views: treating corporations as legal “persons” is a way to limit corporate rights, not expand them. Counterintuitively, “corporate personhood has been deployed in precisely the opposite way from how today’s critics of Citizens United imagine.” But that is jumping ahead. The evolution of corporate rights in America from Bank of America to Citizens United, in which the Supreme Court greatly expanded the first amendment rights of corporations by striking down limits on election spending, was hardly a smooth, linear process.

The Lochner era, as an example, is typically associated with decidedly pro-business rulings of an accommodating Supreme Court during the early 20th century. But that general framing glosses some fascinating nuances, including that the Lochner era saw significant limitations placed on corporate rights. In 1906, the Supreme Court rejected the notion that a corporation has a Fifth Amendment right against self-incrimination.13  Two years later, the court rejected a compelling claim by Berea College that a Kentucky law banning any school from having a racially integrated student body violated the college’s right of association.14 The college was the only integrated school in the South. The court’s opinion said that there was “no obligation to treat” the corporate form of the college the same as an individual — the corporate form justified different treatment. (During the civil rights era, the Supreme Court would change course in this regard, holding that the NAACP had a right of association and the State of Alabama could not force the group to divulge its membership list. To reach this conclusion, the court again pierced the veil, looking to the rights of the NAACP’s individual members.)15

And in a 1916 case involving limits on election spending, one federal District Court roundly rejected a corporation’s claim that limits on such spending violated its right of free speech. Relying on the separate legal personhood of corporations, the court noted: “The time has not come when the right of suffrage will be extended to the artificial beings known as corporations.”16 This understanding would remain the law for nearly 100 years; but the time would indeed come when corporations would earn the right to influence elections through financial expenditures, which would come to be viewed as the exercise of First Amendment rights.

There is much to recommend about We the Corporations; but the discussion of the 1896 presidential election and the subsequent Great Wall Street Scandal of 1905 stand out as crucially important sections. The election of William McKinley marks the first “dark money” election in U.S. presidential history. (The were no federal laws requiring campaigns to disclose contributions until 1910.)  New York Life Insurance was among the contributors to the McKinley campaign.17 At the time, life insurance was “the preferred retirement plan of most Americans who could afford it, “with “about 76 million people [having] a stake in the company.”18 The unprecedented cash gifts given to McKinley — and later Theodore Roosevelt — scandalized the nation. (It did not help that New York Life officials perjured themselves by denying the contributions.)19 Critics charged that the company was misusing the money of “widows and orphans” to lobby for political outcomes against their best interests. The corporation, in other words, was leveraging other people’s own money against them. (One of the loudest voices sounding that alarm was Louis Brandeis, the future Supreme Court justice, who penned Other People’s Money: And How the Bankers Use It in 1914.20) In response to the scandal, Congress passed the Tillman Act in 1907, prohibiting corporations from contributing money in connection with political elections.

How, then, did we end up with Citizens United, striking down limits on election spending by corporations? Here, again, We the Corporations provides some delightfully surprising answers. The NAACP case would lay crucial groundwork in providing a legal foundation for recognizing associational rights of corporations. And a young consumer advocate by the name of Ralph Nader, founder of Public Citizen, would secure a major First Amendment victory validating a novel theory of “listeners’ rights,” striking down bans on advertising pharmaceutical drug prices because such bans infringed the rights of those “listeners” who would derive benefit from the information.21 While Nader’s group clearly intended their challenge to benefit consumers, it would not be long before the logic of “listeners’ rights” would be employed by a corporation, arguing that limits on corporate election spending similarly interfered with the rights of “listeners.” In First National Bank of Boston v. Bellotti, Justice Lewis Powell (to whom Winkler devotes an entire chapter titled “The Corporation’s Justice”), writing for the majority, turned Public Citizen’s victory on its head, holding that corporations have a First Amendment right to contribute to ballot initiatives.22

In one sense, Citizens United could be seen as a logical extension of these prior cases. But in another sense, Citizens United overturned two very recent precedents — Austin v. Michigan Chamber of Commerce (1990) and McConnell v. Federal Election Commission (2003) — that had meaningfully limited corporate rights. In Austin, the Supreme Court had upheld Michigan’s Campaign Finance Act, with Justice Thurgood Marshall writing for the 6-3 majority: “state-created advantages not only allow corporations to play a dominant role in the nation’s economy, but also permit them to use ‘resources amassed in the economic marketplace’ to obtain ‘an unfair advantage in the political marketplace.’”23 Similarly, in McConnell, again upholding campaign finance restrictions, Justice John Paul Stevens observed that the Court had historically upheld legislation aimed at “the corrosive and distorting effects of immense aggregations of wealth that are accumulated with the help of the corporate form and that have little or no correlation to the public’s support for the corporation’s political ideas.”24

Rather than settle the debate around Citizens United, Winkler’s contribution is to provide invaluable historical context to the discussion of corporate rights. Corporations did not suddenly win their rights in 2010 — they have been winning (and, sometimes, losing) them since 1809. Their victories have been, though well-documented, often little understood. We the Corporations brings the untold history of the “corporate civil rights movement” into focus, adding a captivating level of clarity and detail to this underexplored area of law.

CHRISTOPHER W. SMITH is a lawyer with David Randolph Smith & Associates in Nashville.  His practices centers on civil rights and personal injury matters. He is a 2015 graduate of Belmont College of Law.