Thurgood Marshall in Tennessee: His Defense of Accused Rioters, His Near-Miss with a Lynch Mob

He was known as “Mr. Civil Rights” for his consistent advocacy on behalf of racial justice and the dismantling of segregation. He argued before the U.S. Supreme Court in Brown v. Board of Education (1954),1 arguably the most important Supreme Court decision in history. He later became the first African-American to serve as U.S. Solicitor General and then in 1967 the first African-American to sit on the United States Supreme Court. Justice William Brennan once wrote that his friend and colleague was “the central figure in this nation’s struggle to eliminate institutional racism.”2 Justice Elena Kagan, formerly one of his law clerks, called him “the most important lawyer of the twentieth century.”3 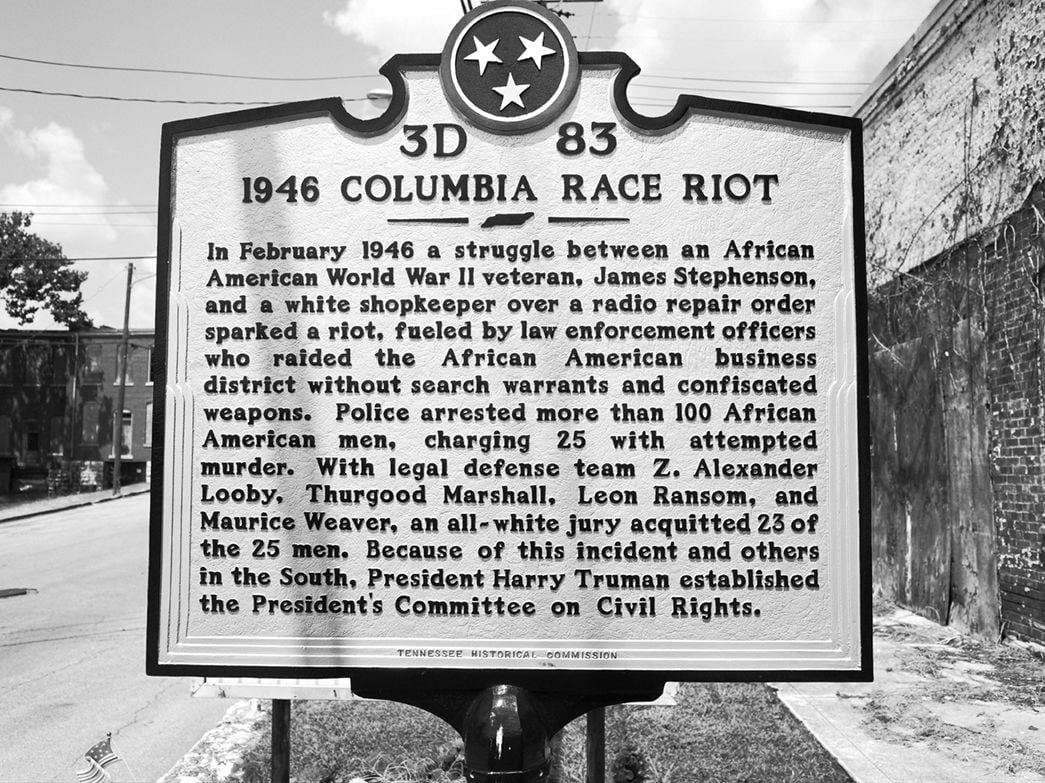 The man of course was none other than Justice Thurgood Marshall, “Mr. Civil Rights,” a giant in American law who served 24 years on the nation’s High Court. But, long before he ascended to the federal bench — and even before his path-breaking advocacy in Brown —  Justice Marshall came to Tennessee to help defend 25 African-American men arrested in the wake of the Columbia Race Riots. 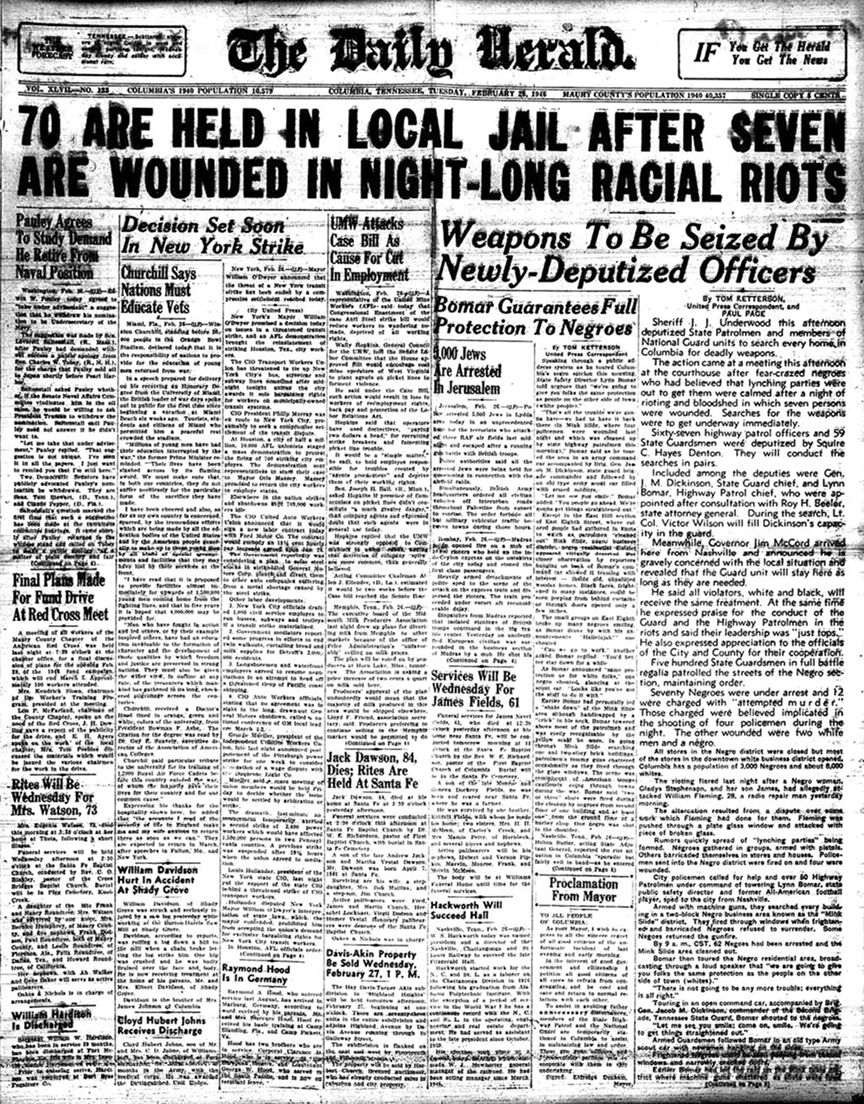 A racial conflict turned into a conflagration after a confrontation at Castner-Knott appliance store on Columbia’s town square on Feb. 25, 1946. Gladys Stephenson, an African-American woman, had taken her children’s radio to the store for repair. She was charged more for the repair than the initially quoted price. Furthermore, the store had not repaired the electric cord as Ms. Stephenson had requested. She and her son James, who had served in the U.S. Navy since age 16, went to Castner-Knott to inquire about this and seek further repair.4

As the Stephensons were leaving the store, employee Billy Fleming walked behind them. James Stephenson stared back at Fleming as he was outside the store window. There is some dispute as to what transpired between Fleming and the Stephensons, but clearly the interaction was not pleasant. According to NAACP correspondence about the incident, Fleming had “slapped and kicked” Ms. Stephenson.5

This upset James Stephenson, who was, according to historian Robert Ikard, “one of the better South Pacific navy welterweight boxers.”6 After Fleming punched Stevenson in the back of the head, Stephenson hit Fleming with a fusillade of jabs, his last punch causing Fleming to crash through a store window.7

Authorities charged James and Gladys Stephenson with disturbing the peace but didn’t charge the instigating Fleming with anything.8 The incident enraged many local whites who were deadset on exacting revenge. A white mob later moved on Mink Slide, the name for the African-American section of the town. The sheriff, J. J. Underwood, wanted to avoid impending violence and tried to keep the white mob from entering Mink Slide.

Some African-Americans heard persons coming into Mink Slide and assumed it was part of the white mob. Gunfire raged with four police officers suffering wounds. The mayor contacted the governor and asked for help. The governor sent the State Guard and the Highway Patrol to Columbia. The State Guard and State Highway Patrol later swooped into the African-American section of town and at least some law enforcement officials allegedly terrorized individual families. Individual homes were searched and more than 300 weapons were confiscated. After the search, a curfew was imposed.9

More than 100 African-Americans were arrested. Two African-American men were shot in the jail, allegedly for trying to grab weapons and escape, but a judge later deemed these suspicious shootings justifiable homicides.10

The entire investigation has been-carried on by the State with the greatest intimidation and coercion or milling mobs of authority so that Negro citizens held in jail have been alarmed and disturbed for their future safety and have been forced to make completely involuntary statements that may probably be in the future be held or used against them.11

Marshall planned to challenge the indictments on the basis of a racially discriminatory grand jury system — that no blacks had served on the grand jury. A judge later ruled that was insufficient to dismiss the indictments, but the judge did move the trial from Maury County to nearby Lawrence County.12

Marshall planned to actively participate in the criminal trials, as he had done in many other states. But, he fell seriously ill and had to go back to New York City to recuperate. Looby, Weaver, and Howard law professor Leon Ransom advocated well for the defendants. To the surprise of many — particularly the prosecutors — an all-white jury acquitted 23 of the 25 defendants. Historian Gail Williams O’Brien called the jury’s verdict “the greatest surprise in the Lawrenceburg case” and an “unprecedented verdict.”13 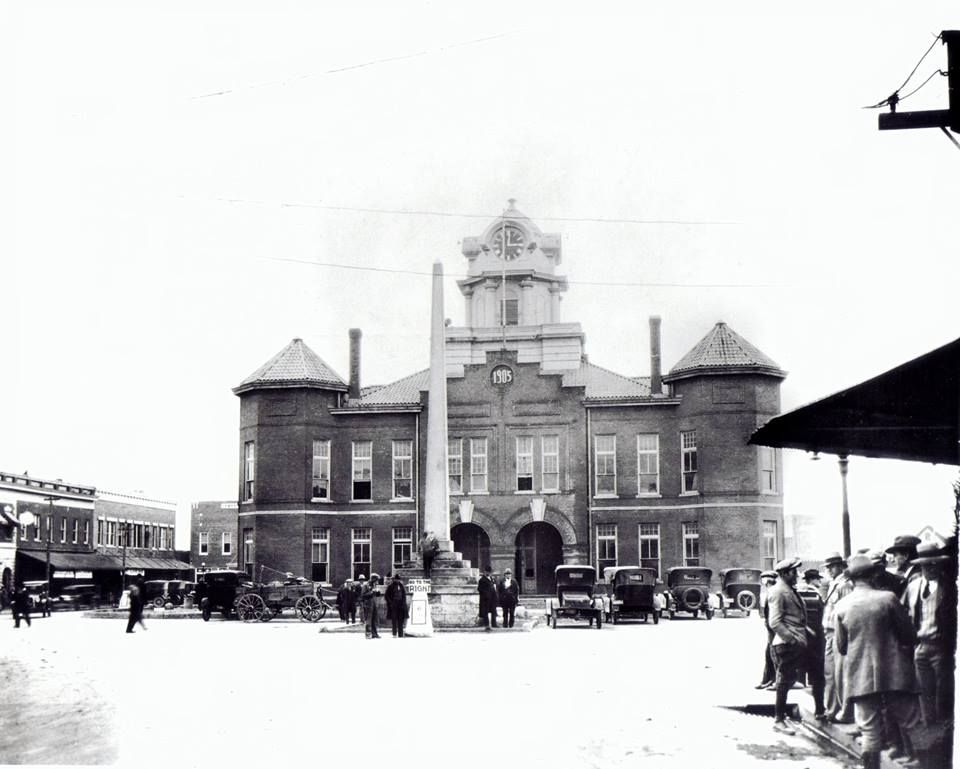 The district attorney, Paul Bumphus, later stated that the prevailing view in Lawrence County was that “Maury County had dumped its dirty laundry” on the people of Lawrence County.14 Historian Robert Ikard writes, however, that “[n]o single, superficial reason could explain the verdict. Rather, the jury had just fairly assessed the information given them and the manner in which it was presented.”15

Marshall later returned for the trial held in Columbia of two other African-Americans tried for firing shots at law enforcement. A four-day trial ended with one not-guilty verdict and one guilty verdict.16 It only took two hours for the jury to come back with its verdict. Many white citizens felt the results were not satisfactory and apparently a few plotted revenge on Marshall.

Marshall rode in Looby’s car along with Weaver and Harry Raymond, a newspaper reporter. The four were trying to safely get out of Columbia to Nashville. However, a police car stopped Looby’s car. They pulled Marshall from the vehicle and placed him in the backseat of an unmarked vehicle. The police told Looby to drive away. Instead, the courageous Looby smelled a rat and followed the police car. The police had not turned to take Marshall back to town but instead toward Duck River and a mob of drunken white men. Marshall recalled: “When we got down to the riverbanks you could see the people for the party. By party, I mean lynch party.”17

The police, apparently noticing Looby’s car, pulled away and took Marshall back to town and charged him with drunk driving. A judge, examining Marshall, determined that Marshall had not been drinking and ordered him released. Marshall rushed to Mink Slide and later escaped with Looby and the others back to Nashville.

Marshall called U.S. Attorney General Tom Clark and explained that he nearly met his demise in Columbia. He told Clark about the trumped-up drunk driving charges. Clark asked Marshall if he had been drinking. Marshall replied: “No, but five minutes after I talk to you I will be.”18 Howard Ball writes: “On his arrival in New York, [Marshall] had more than one bourbon to try to erase the horrors of his past few days in rural, brutal Tennessee.”19

Of course we know that Marshall survived this ordeal in Columbia, and later achieved a string of victories in the U.S. Supreme Court, garnered a judgeship on the 2nd U.S. Circuit Court of Appeals, the solicitor generalship, and in 1967 his historic appointment to the United States Supreme Court. But, he never forgot his harrowing experience in Columbia,
Tennessee. 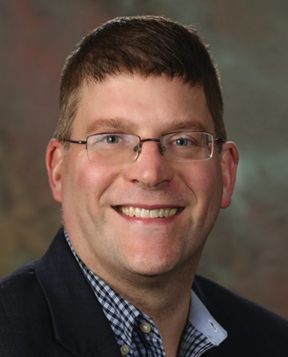 DAVID L. HUDSON JR. is the author, co-author or co-editor of more than 40 books, including several on the First Amendment and an upcoming audio lecture series on Thurgood Marshall titled “Justice Thurgood Marshall: Mr. Civil Rights.” He is an assistant professor of law at Belmont Law School and also teaches at the Nashville School of Law. In 2018, the Nashville School of Law awarded him the Distinguished Teacher award for his “profound impact on the school and its students in the 13 years of his tenure, earning the respect and trust of hundreds of students who have had him in class.

LEARN MORE
Listen to the author, David L. Hudson Jr., in this podcast-style audio course, detail more about Thurgood Marshall. In the 15-lecture series, you’ll follow the trajectory that led Marshall to become a transformational counsel for the NAACP and in 1967 the first African American Supreme Court Justice. He sat on the Court for 24 years, leaving an indelible impact in many areas of law. You’ll understand why Justice Elena Kagan has called him “the most important lawyer of the 20th century.” Check out "Thurgood Marshall: Mr. Civil Rights and the Fight for Racial Justice." 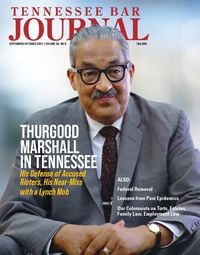