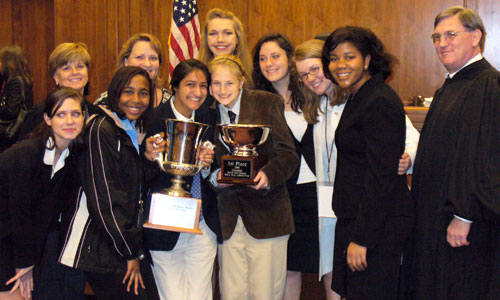 NASHVILLE, March 15, 2008 — St. Mary's Episcopal School from Memphis scored a final round victory over Brentwood High School to win a second-straight title in the Tennessee State High School Mock Trial Competition in Nashville. The team will now represent Tennessee in national competition, May 8-10 in Wilmington, Del.

Sixteen high school teams from across Tennessee put their legal skills to the test during the Tennessee Bar Association's annual State High School Mock Trial Competition. About 200 students and 200 volunteers – mostly, judges, lawyers and law students – gave their time and expertise. Sitting judges in the state presided over each round, with Tennessee Supreme Court Justice William C. Koch Jr. presiding over the championship match.

To reach the state competition, teams had to win district competitions by playing the roles of attorneys and witnesses in a fictitious case developed by the Tennessee Bar Association’s Young Lawyers Division. This year, teams presented Sidney Young v. Riley Gardner, a civil case resulting from a car accident involving teenagers. The teenage driver was allegedly speeding and text messaging while driving a car filled with high school students. When the teen’s car skidded off the road and hit a telephone pole, the front seat passenger sustained significant injuries. As usual, the case presented quite a few twists and turns. Conflicting testimony shed doubt on whether it was the driver or the passenger who was "texting" at the time of the accident. Also, questions were raised about the roles that alcohol, road conditions, and a tire blowout may have played in the crash. 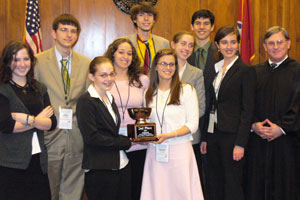 Brentwood High School was runnerup in the competition. 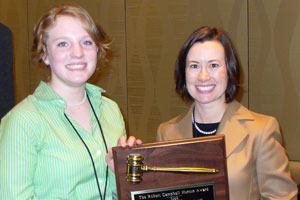 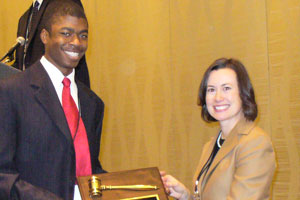 C.J. Strode of Warren County High School in McMinnville (left) receives the Best Advocate for the Defense award from Sweeney. 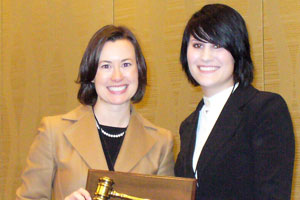 Danyelle Dover of Family Christian Academy in Chattanooga (right) receives the Best Witness for the Defense award from Sweeney. 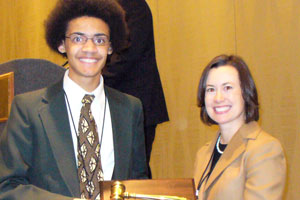 Austin Beckford of the Memphis University School receives the Best Witness for the Plaintiff award from Sweeney.