I Swear: The Meaning of an Oath 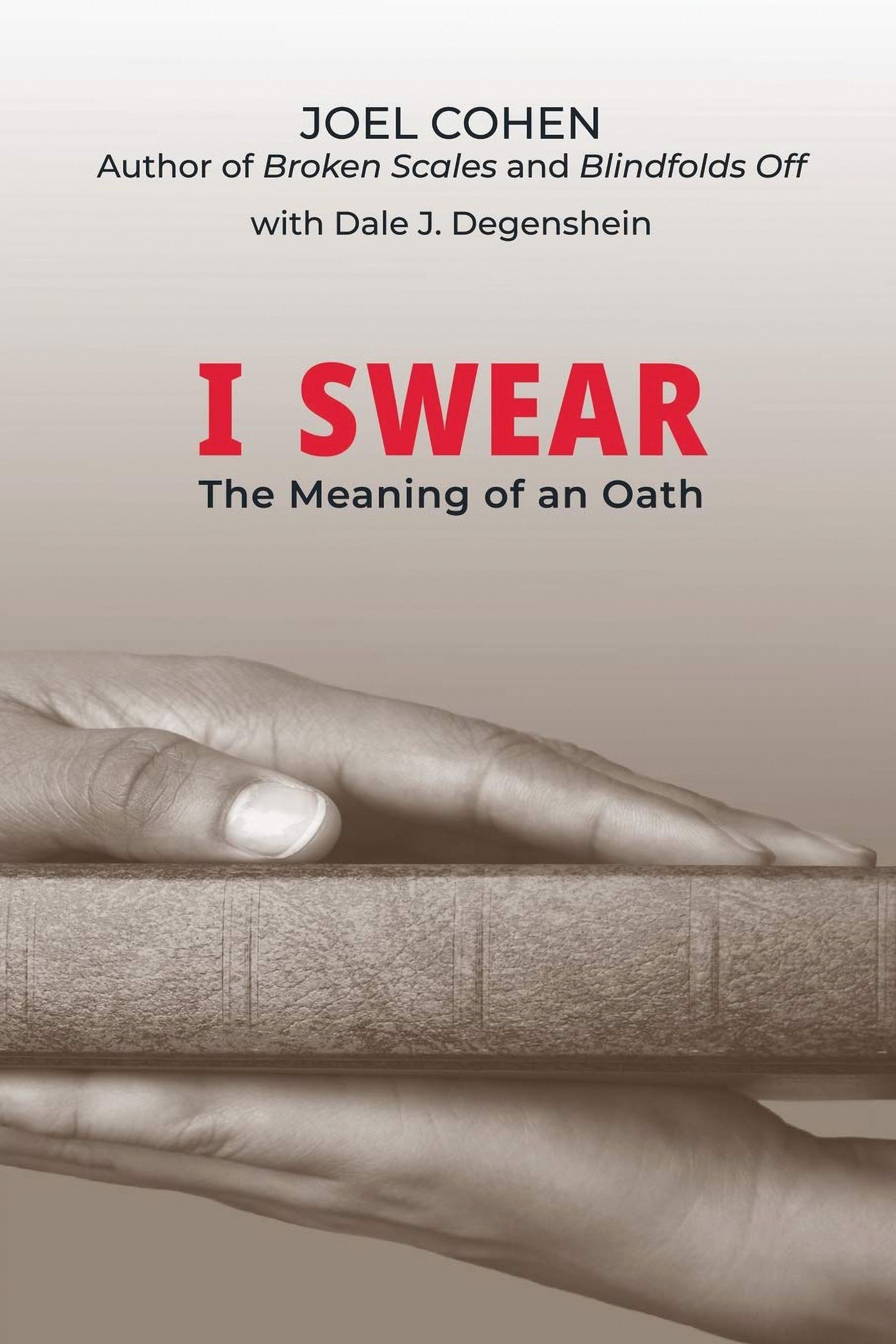 Joel Cohen is a distinguished New York lawyer who prosecuted with the Organized Crime & Racketeering Section of the U.S. Attorney’s Office for the Eastern District of New York for several years and then went into private practice with the firm of Stroock, Stroock & Lavan LLP, where he specializes in white collar criminal defense.

He is a frequent contributor to the New York Law Journal, Slate, The Hill, and Law & Crime on subjects pertaining to criminal law and legal ethics. He has also published four works of fiction, including Truth Be Veiled, a Justin Steele Murder Case, which addresses a criminal defense lawyer’s sometimes dilemma in dealing with “the truth.”

I Swear is the successor to Mr. Cohen’s two previous works of nonfiction, Blindfolds Off: Judges On How They Decide (2014), and Broken Scales: Reflections on Injustice (2017) (both reviewed here). In his Foreword, the author states that by examining specific oaths taken by specific individuals, he seeks to raise broad questions and invite discussion “about the different types of oaths that people take and the impact of their failure to comply with that oath — on them and on those who relied on that oath.”

He then examines eleven real-world instances of oath-taking and the oath taker’s encounter with circumstances that tested the limits of the promise made. One such case addresses the lawyer’s professional duty to maintain the sanctity of the attorney-client privilege (or not) when disclosure of the client’s confidential information could correct an extreme injustice (specifically, the wrongful incarceration of an innocent man).

Prior to his 1986 trial for a double murder, the defendant (“Cashwell”) told his defense lawyers that he alone had killed the two victims. Importantly, they believed him without qualification (often not the case in criminal defense practice, even when the ostensible “admission” is clearly against the client’s interests). After a reversal of his conviction on appeal, Cashwell pleaded guilty and was sentenced to life plus 50 years.

In the meantime, however, the State of North Carolina convicted a second man (“Hunt”) for the same two murders, and he was sentenced to two life terms of imprisonment. Bound by their oaths as attorneys, however, Cashwell’s lawyers had no choice but to preserve their client’s privileged communications. They did so even after Cashwell reminded them (some 15 years later) that Hunt was still “out there” (serving life in prison); in fact, they affirmatively advised him to maintain his silence, concerned that his acceptance of sole responsibility would prejudice his chances of parole. Such was the strength of their commitment to what they perceived to be their client’s best interests (as opposed to encouraging him to “come clean”).

Shortly after his “reminder” to his lawyers of Hunt’s innocence, Cashwell committed suicide in prison. In the view of one of his lawyers (based partially on his interpretation of a recent North Carolina Supreme Court decision), this allowed him to disclose Cashwell’s admission to Hunt’s lawyer, which he did.

At an ensuing post-conviction hearing for Hunt, however, the trial judge warned the lawyer that if he testified to the substance of Cashwell’s confession, he (the judge) would report him to the state bar for disciplinary proceedings and possible disbarment. (The judge evidently took a different view of the intervening North Carolina Supreme Court decision.) And the lawyer’s co-counsel declined to testify to the Cashwell confession unless the judge compelled them to, which he did not.

In the end, the lawyer’s unburdening of Cashwell’s confidences did Hunt no good. The North Carolina courts ruled that Hunt had failed to establish his “actual innocence” (a term of art in post-conviction procedure that sets an essentially impossible standard), and Hunt likewise died in prison.

This sad story serves as one of Mr. Cohen’s examples that the power and effect of an oath ultimately lies in the eyes of the oath taker. Cohen finds this theme in the ancient words of the Greek tragedian Aeschylus, which he quotes or alludes to more than once: “It is not the oath that makes us believe the man, but the man the oath.” In the view of one Cashwell lawyer, his attorney oath had an exception for extreme injustice; in the view of other lawyers (including, evidently, the state trial judge), the very same oath did not. “Policy arguments” can be made on both sides (although Cohen suggests that but few ethical lawyers today would take it to the extreme of keeping a client’s secret inviolate when its disclosure could prevent an innocent man from going to his death).*

Mr. Cohen also presents real-world case studies concerning the oaths of testifying witnesses, physicians, clergy and jurors (vis-à-vis “jury nullification”), as well as the marital vows (among other varieties of oaths). I Swear well fulfills Cohen’s stated goal of raising broad questions and inviting discussion about the different types of oaths that people take and the impact of their failure to comply with them.

JIM THOMAS is a partner with Neal & Harwell PLC in Nashville.

NOTE
*In this connection, it bears noting that current Tennessee Supreme Court Rule of Professional Conduct 1.6(c)(1) would apparently require the hypothetical lawyer with privileged knowledge exculpating an inmate on the brink of execution to disclose it to the authorities: “A lawyer shall reveal information relating to the representation of a client to the extent the lawyer reasonably believes disclosure is necessary … to prevent reasonably certain death or substantial bodily harm[.]” (Emphasis added.) Curiously, the Rule does not speak to the wrongful incarceration scenario at issue in the North Carolina case.