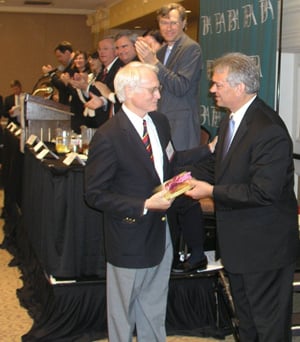 The Tennessee Bar Association (TBA) has renamed its award honoring public service attorneyes as the Ashley T. Wiltshire Public Service Attorney of the Year Award. Outgoing TBA President Larry Wilks (right) made the announcement during the 2007 TBA Convention in Nashville.

This award is given to an attorney for representation above and beyond the call of duty of an indigent client in either criminal or civil defense in the past year and who is or was employed by an organization primarily involved in providing legal representation to the indigent.

Nominations for the award are solicited by the TBA Access to Justice Committee which makes a recommendation to the TBA Board of Governors on the winner each year.

The first Ashley T. Wiltshire Public Service Attorney of the Year Award will be presented at the TBA Public Service Awards Luncheon scheduled for Saturday, Jan. 19, 2008.